You know what I just got done doing this Saturday morning? I’ll tell you.

Going through the ultimate uncomfortable exercise of budget-balancing with my paycheck. To add extra hot sauce into the mix, my wife and I (because our money is our money, not his/her money) we did it with our two oldest sitting at the table.

So they learn many important things such as cooperation, negotiation, being humble (because the Stang could use parts over the kids needing a new textbook right guys?), that I do not work for free nor do we have the liberty to spend without knowing where it goes, and the sacrifices that we are making to live off of one income, etc..

Of course, we just really hope they learn how to handle money wisely as no one ever taught me.

In the end, this is never comfortable, depressing, and we end thinking, “Will we ever be able to just enjoy a “few luxuries” that other people enjoy without breaking the budget?”

But you know, my mouth dropped when I read the blog post below about 30 minutes after our meeting.

Money sure isn’t everything and I don’t know if I’d want to get my brains beat-out to make it, but WOW.

When I’m seeing the crazy reality-show stars or some other “celebrity” that seems to have never-ending stacks, I look at my wife and say, “So why did I go to college and get a degree?”

Oh, and I still owe up to my neck for that decision to add insult to that injury as well.

In the meantime, I’ll keep remembering the following verse:

Keep your lives free from the love of money and be content with what you have, because God has said, 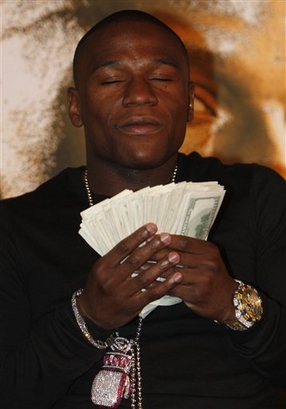 Floyd Mayweather loves money, which is good, because he has lots of it.

The champion boxer, who has never been afraid to flaunt his fortune, was at one point the highest earning athlete in the world, bringing in $85 million in winnings alone.

And with all that dough, you’d think Mayweather might want to spread his assets across a few accounts. Perhaps stash it in different banks and/or different accounts. You know, just in case.

Mayweather, however, doesn’t think that way.

In an excellent profile of the 36-year-old prizefighter in ESPN The Magazine, Tim Keown discovered just how many bank accounts Mayweather has — one.

That’s right, Mayweather keeps his fortune in a single account. Below is Keown’s reaction to seeing one of Mayweather’s bank slips.

I look up to see Floyd smiling. He begins to laugh. I say something unintelligible about too many numbers. I’m not sure what prompted this. Perhaps he mistook my look of fatigue for disapproval? Given his spending habits, is he concerned with pre-empting the inevitable talk that he will end up broke? Or is it simply one more example of the man’s hubris? I look down one more time to make sure I got it right. And yes, it’s right there, 11 numbers long.

There is more than $123 million in Floyd Mayweather Jr.’s bank account.

He nods, folds the slip and says, “One account, baby.”

This doesn’t seem like the greatest idea, but in Mayweather’s defense, he’s earned his money so he can do whatever he wants with it. And according to recent reports, his fortune is about to get a whole lot bigger.