My Rack Pull weight, but getting this off the floor as a true Deadlift may be a bit more difficult!

According to Psychology Today, we do not gain nearly as much weight as we think we do during the holiday season:

“What they found is that people thought they were gaining four times as much as they actually had gained! Fewer than 10% of their sample actually gained over five pounds. Most had gained less than a pound. But those who were overweight or obese initially were the ones most likely to gain those five or more pounds, so their conclusion was that the holiday season “may present special risks” for those who do already have a weight problem. Furthermore, the researchers found that even though the average weight gain was fairly minimal, people tended to gain the most weight for the year around this time and not lose this holiday weight once the holidays were over. The result is a “cumulative” gain, or what we might call a kind of “holiday creep.” In other words, even though for many, the actual weight gain this time of year is trivial, it may not be trivial over time.”

So regardless of what camp you fall in, my philosophy has always been to amp up your workout just as much as you amp up your eating habits during the holiday season. I’ve found that people not only eat more on purpose, but they also intentionally workout less and say, “I’ll start or resume working out when the holidays are over.” This of course leads to the old New Year’s lose weight resolution and we all know how that goes.

So to help myself out, I’m going to post what I’m doing in the gym this holiday season. This will certainly assist me in keeping my own diet in check, but I hope it will also assist you in some way as well. Over the last few months, I’ve really been a bit of a Brooks Kubik fan, and his writings have persuaded me to do what I’ve never really done since the old Muscle Media 2000 Shawn Phillips Bench Press program days and that’s minimize everything to maximize getting stronger. Longer story short (for this post, but I’ll go into more later), I’ve made the best gains in the last 2-3 months than I have in years!

But more on that later…

So what did I do today?

Diet: Thanksgiving with all the trimmings and desert, so I probably took in about 4,000 kcals today!

But I hope I earned the food:

Set 12 in the most important exercise was a new PR!

Rack DLs – Lower back felt great and I felt extremely strong this morning.

Barbell Curls – I think I’m beginning to stall as in the past I was doing 5 reps for a few sets. It’ll get pulled next phase.

I have been writing this blog for three years and as I look back, I realize all that has changed in my life in that time span. One “consistent change” however, have been the different looks that I have sported in this time frame. This has all been to do the disease that I have called Alopecia. More specifically, Alopecia Universalis meaning, that I lose every stitch of hair over my entire body.

Alopecia areata affects approximately two percent of the population overall, including more than 6.5 million people in the United States alone. This common skin disease is highly unpredictable and cyclical. Hair can grow back in or fall out again at any time, and the disease course is different for each person.

It’s really hard to me to remember when it happened. When I was in my mid-20’s, I remember having a bump, similar to a razor bump, that was located at the very top of the back of my head. Since I’ve always had struggles with eczema, scratching my scalp was quite common, and I thought I just had scratched the bump so much, that it ended up causing a dime-sized bald spot in that area. It was still slightly embarrassing, as some of the fellas would “go there” when we were playing the dozens, but it was nothing compared to what would soon come.

A few years later, around 30, I then lost hair on the right side of the back of my head, just at the hair line (see photo above for an exact example). A dime-sized circle turned into a nickel, which turned into a quarter, then a half dollar. Coin size-value was increasing faster with my bald spot than the interest in my bank account for sure. Then the worst happened, another spot developed just to the left. Then another spot just above the original. I had no idea what was happening as the skin in those areas were the smoothest parts of my body, not one sign of hair ever being there, no “shadow”, no stub, completely smooth. Then the worst happened, the spots became so large that they connected. Now, while the rest of my hair grew as normal, I had this huge area in the back of my head that looked like a beach being eroded at high-tide. 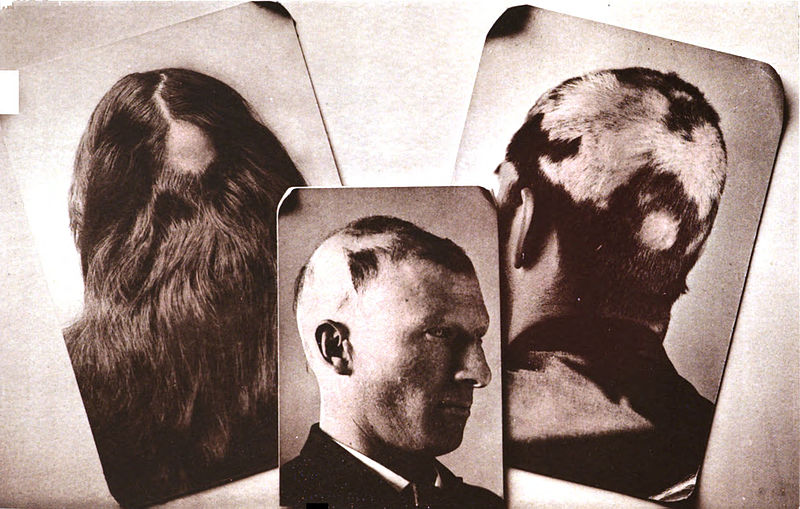 Next, alopecia waged war on a different front, my front hair line. Victory proved easy, following the same progression, patch, patch, connection, gone. Looking back, because of the tremendous amount of stress that I was under in my life, I have no idea how long it took. But the impact on my self-image was severe. I just remember being in college, where as a Sports Medicine major, I was already the “old guy” in the room, and here my hair is falling out in patches like I’m 80 years old or something. But I’ll go into detail on the reactions of others in upcoming posts. 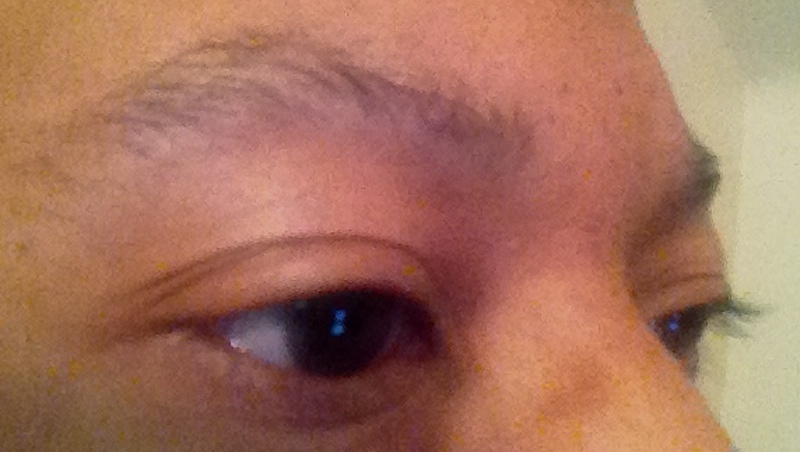 As you can see above, I am writing this on November 24, 2013. I do not know how long it will take for me to complete this series of posts on this condition, but I will take you on a trip with me through yet another battle, or maybe I should say, journey. I’ve given up fighting so many times, so it’s a journey. Then I’ll try a treatment and then it’s a battle. All I know is that just when it gets “easy”, alopecia throws another pitch that I didn’t even know it had in it’s arsenal.

So the disease is attacking my hair follicles again, after being pretty quiet most of 2013. But in less than two weeks, right in time for cold and flu season no less, I’ve lost almost all of my nose hairs. Yes folks, with alopecia, your realize why God placed hair in all those areas we take for granted. That was the first sign that I was under attack. I went from shaving my head nearly every other day (this year I never had full growth, those various thick white strands to shave), to once over the last two weeks. I have not needed to trim my mustache in two weeks either, leading me to estimate that the attack officially began in mid-November.

My main reason for chronicling the progress this time is to help others who may be suffering. As I was doing a bit of research over the last couple of days, there still is not much known about alopecia, and the message-boards are still hot with people saying, “What is happening to me?” and “Will this stop?” There might be some young person in high school getting teased by the kids for having ringworm and being treated like they are “dirty”, when alopecia is behind those developing patches on their head.

For my fellow alopecia folks out there, I know I do not have it as bad as some from a social standpoint. First, I’m a man. Alopecia is exponentially worse for a woman than a man for obvious reasons. Next, I’m an African-American male, and rocking a bald head has always been socially and fashionably acceptable in our community. But in my reading, I’m noticing that we all have different areas that may make “my disease” worst than “your disease”. Yet, in the end, we all appear to go through the trials, like having people stare at us, getting asked if we have cancer or become lab rats for doctors who have no clue what to do or what drug to give to “fix-it”.

In the meantime, if someone has a question or a desire for me to share on a specific area, please email me or let me know in the comment section. Alopecia and I have been warring for nearly 15 years, so while it still may beat me, I can share with you a little bit on how it fights.
CSD

The weather’s getting ugly, it is getting cold, the daylight hours are ever so elusive, so I’m stuck indoors. That’s the bad news.

The good news is that maybe I can get more reading done.

Lyn makes a point early on in the book that we often develop and approve the player mentally as parents. Therefore, we lay the soil in which the idea of having multiple relationships is acceptable for boys but not for girls. Her example goes something like this:

Son comes home from school and says, “I have five girlfriends!” Dad says, “See, he’s a chip off the old block!” Mom says, “I’m so happy to hear that you are so popular!”

Does that scenario sound familiar? Has a similar scene played out in your home or the home you grew up in?

Lewis’s point is simple. At a very early age, we teach our sons that the more girls he “has”, the better he is as a “man”. Yet when it comes to our daughters, that same behavior is seen with disdain. My show Good Times even highlighted this fact. Let me take some of you back to a promiscuous JJ, who throughout the series was known for having his mind on nothing but girls, juggling one after another. James would come along with that infamous grin and laugh as he saw JJ’s ability with the ladies as an extension of us own masculinity as well. However, when Thelma came in talking about being in love and getting married to Larry, the reaction was, “Girl, what do you know about love?” James blew up, Florida had to calm him down and well, look at his classic reaction to the “nice guy” that his daughter wanted:

Leveling the playing field is not the solution and has never worked in the past. It’s beyond the scope of this article to prove why this is the case. But for now, I’d like to encourage you to examine whether you are creating a player in your home? Are we reinforcing a mentality that tells men that the more women you have, the better? To our daughter are we saying, “You can’t do what the player does, but consider it an honor if he chooses you as one of his girls.”