I struggled with whether I should write this post, but I’ve been continuously hearing about the “barbaric and savage” actions of ISIL, came out of seeing American Sniper to some guys saying, “If they want to give their country to some kids like that, then we should kill ’em…” and some getting upset at President Obama’s comments in which he truthfully pointed out:

“Lest we get on our high horse and think this is unique to some other place, remember that during the Crusades and the Inquisition, people committed terrible deeds in the name of Christ. In our home country, slavery and Jim Crow all too often was justified in the name of Christ. … So this is not unique to one group or one religion. There is a tendency in us, a sinful tendency that can pervert and distort our faith.”

Rush Limbaugh, someone who many Christians follow and align their beliefs with rather closely said, “Jim Crow’s not around today.  A thousand years ago, yeah.”

Mike Huckabee and Elisabeth Hasselbeck on Fox, two self-proclaimed Christians, seem to take issue with the president’s comments as well, because he did not condemn Islamic terrorism enough during his speech.

While that’s certainly a conversation for another time, I’m more concerned about the complete ignorance by those who many Christians follow daily. Their position is even more appalling for many African-American Christians and even those who may not profess Christ (see HERE and HERE). Sorry Rush, no “ditto” here, but Jim Crow laws were in full effect until at least 1965. While I’m an old man, that’s less than a decade before I entered into this world, and I’m not a thousand years old.

The question becomes, is Rush that ignorant or does he know that most American’s are ignorant enough not to know their own history, or a combination of the two?

Jesse Washington, seen in the photo below, was murdered in 1916. For the math impaired, that’s only 99 years ago, during the other event we all must study in school called WWI.

In a report just released yesterday by the Equal Justice Initiative, it states:

“EJI researchers documented 3959 racial terror lynchings of African Americans in Alabama, Arkansas, Florida, Georgia, Kentucky, Louisiana, Mississippi, North Carolina, South Carolina, Tennessee, Texas, and Virginia between 1877 and 1950 – at least 700 more lynchings of black people in these states than previously reported in the most comprehensive work done on lynching to date…This was not “frontier justice” carried out by a few marginalized vigilantes or extremists. Instead, many African Americans who were never accused of any crime were tortured and murdered in front of picnicking spectators (including elected officials and prominent citizens) for bumping into a white person, or wearing their military uniforms after World War I, or not using the appropriate title when addressing a white person. People who participated in lynchings were celebrated and acted with impunity. Not a single white person was convicted of murder for lynching a black person in America during this period.” (Emphasis mine) – See HERE

Please read that last sentence again if you wonder why, as late great sports journalist Ralph Wiley wrote the book, Why Black People Tend To Shout. Ralph wrote this when we were shouting about Rodney King (and having so-called honest discussions about race and taking down barriers…remember that?)

Today, we are still shouting about Trayvon Martin, Tamir Rice, Eric Garner, John Crawford and so many more.

I wrote about going to hear author James Loewen HERE. During the lecture, Loewen presented a similar picture to those below and noted a few points.

#1 – Lynchings were so common, that many were unreported because it just wasn’t news. It was just something American’s practiced. Obviously, Loewen’s statement is backed up by the research above.

#2 – Lynching in America was so common, that Americans were proud. So proud, they took their children to watch, created post cards showing the brutality (who did they send those too?) and even smiled for the camera.

#3 – Lynching, the murder of another human life, was done with no fear of the law. Obviously, when you look at the photos and see that no one covered their face with shame or shielded their kids from seeing such a, dare I say, a barbaric and savage act, done by those who I’m sure also considered it their obligation to be in church on Sunday.

That last point, is President Obama’s point. The symbol of the KKK was and is the cross. Our Savior died on a cross to redeem mankind (John 3:16-17). In the comments below, since we have many sermons by Christian ministers from 100+ years ago, I would appreciate if anyone could list where I can find some messages of those ministers speaking against them using the cross and the other acts of terrorism they perpetrated from the late 1800’s to mid-1900’s.

I’m serious, because I can find you some African-American ministers who did speak out.

Trust me, if you’re a light-shaded Christian and you’re discussing the President’s remarks with a Christian from a darker people-group, they will likely think of the above, but likely not say anything as we just know this is the cost of “doing business”.

As a father, I protect my kids from many things, but history is not one of them. The last thing I want to raise in my house are children as ignorant as the talking-heads in the media, that feed many of those I work and even go to church with each week.

Take a look at the photos.

Take a look at everything in the photos.

Perhaps the true grotesque image is not the body hanging from that tree, but the smiling face looking at you in the picture.

I’ll leave you with what I always encourage my readers to do. Ask your relatives who were alive what they thought back then, ask what they remember. This history wasn’t a thousand years ago, that history may be sitting next to you on Easter Sunday. 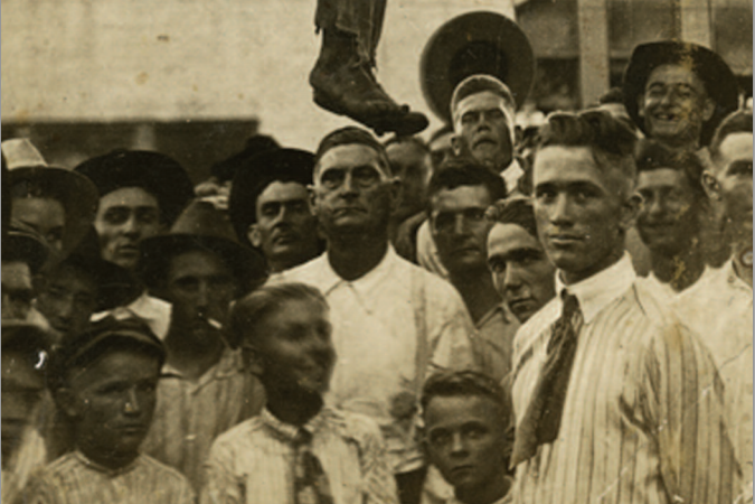 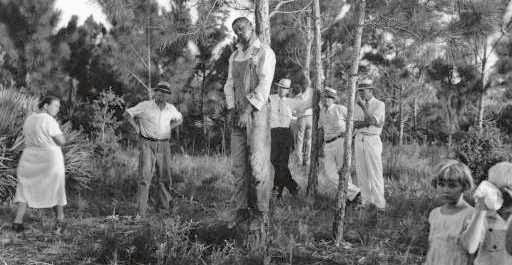 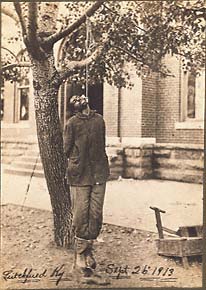