: a tenant farmer especially in the southern United States who is provided with credit for seed, tools, living quarters, and food, who works the land, and who receives an agreed share of the value of the crop minus charges
Source: http://www.merriam-webster.com/dictionary/sharecropper

Now, I’ll be one of the folks telling high school grads, “I went to college and got a degree and I make more money than average, but I’m still poorer than most people who didn’t go to college!”

“Under this system, black families would rent small plots of land, or shares, to work themselves; in return, they would give a portion of their crop to the landowner at the end of the year.

The sharecropping system also locked much of the South into a reliance on cotton, just at the time when the price for cotton was falling. In addition, while sharecropping gave African-Americans autonomy in their daily work and social lives, and freed them from the gang-labor system that had dominated during the slavery era, it often resulted in sharecroppers owing more to the landowner (for the use of tools and other supplies, for example) than they were able to repay. Some blacks managed to acquire enough money to move from sharecropping to renting or owning land by the end of the 1860s, but many more went into debt or were forced by poverty or the threat of violence to sign unfair and exploitative sharecropping or labor contracts that left them little hope of improving their situation.”

At the current rate, over the next few decades, we will likely return back to a time when only the affluent can afford a college education and those who previously had earned a college degree, will not be able to afford to send their own children to school and will be paying student loan payments out of their social-security checks.

“Forget hitting the books son, better go dribble that basketball or throw that football to get a scholarship!” 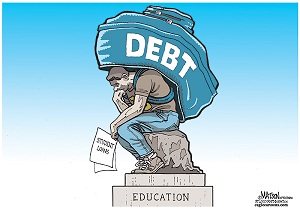 Oh, and before someone comments, “Well, if you can’t afford to pay for a college degree, then you shouldn’t get a loan to pay for one!”

As a Dave Ramsey fan, I agree.

So surely you don’t have any credit cards, a car note or a mortgage right? Because if you can’t pay cash for a house, then why should you feel entitled to get a loan to buy a home. After all, the amount many owe in student loan debt equals what they would pay for a home.

Also, I’ll agree more with that statement when our student loan debt is seen as “too big to fail” like the banks that loaned the money, and maybe it can just be wiped off the books.

…just like the folks that walked away from their houses when they bought more than they should have when those loans were flowing like water.

Quite honestly, college is still the best option for the young and old. However, my gripe is with the “wisdom” that getting the education is a guarantee to a great paying job, home ownership, and “you’ll make much more money than your peers that didn’t go to college over your lifetime.”

Well, none of those are absolute truths.

But you better be absolutely sure what you want to major in, how much does it pay in the end and know exactly what you can pay off. Because while the banks that loaned you the money are too big to fail, you aren’t…and you can’t file bankruptcy on student loan debt like they can!

Check out this article from blog.metrotrends.org

With national student loan debt of roughly $1 trillion, it’s no surprise that many Americans are worried about their student loans.

We published a new brief on school-related debt, using the FINRA Investor Educational Foundation’s 2012 National Financial Capability Survey. One in five adults age 20 and older has school-related debt and concern about the ability to repay is pervasive. The majority of student debt holders (57 percent) is worried that they may be unable to repay that debt.

If Congress doesn’t reach a compromise and the rate of subsidized student loans doubles, student loan debt and the increased payment burden will increase stress around repayment.

Beyond the short-term burden of repaying loan balances and interest, this early debt can have ripple effects and hinder borrowers’ ability to get on a secure wealth-building path. It can delay building a rainy day fund, homeownership, and saving for retirement.

Some of our findings may not be shocking to those who write monthly checks to Sallie Mae, yet they illustrate the magnitude and pervasiveness of the issue:

College is a good investment for those able to complete the degree, but roughly half of people do not. Out of the starting gate, students should consider the cost and completion rate at the institution they plan to attend, earnings in their field of study, and type of student loan (public or private). Helping young people take advantage of student loans to get their degrees—but avoid burying themselves in debt—is a step in the right direction toward economic stability and wealth accumulation.