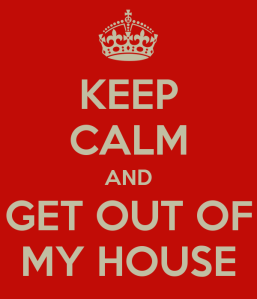 Today a colleague at work was asking my son about home-school and I loved his comment about me.

He said, “Well, I know you think your dad is tough, but lets just say that he has standards.”.

In my neighborhood growing up, we only had a choice of two junior high schools in our area. One was public and could have just been called Prison Prep, and the other was a small Catholic school a few blocks away. My parents chose to send me and my siblings to the Catholic school at who knows what kind of cost to the family budget.

So likely in considerable debt to give us a better life, I had the nerve to jump in the car after a day I probably got picked on for my weight and glasses (yes anti-homeschoolers, not all socialization is good socialization), and told my dad I wanted to quit school. Calm, cool and collected, I remember my dad gently explaining to me that I could do that if I wanted. My mind began to hit the dream sequence of getting a job as a batboy for a major league team, until they are ready for me to play at 18, and I’ll live at home playing baseball everyday till then (can you tell my junior high days pre-date video games?).

But dad didn’t stop there, he also told me that I must be prepared to move out because nobody that didn’t go to school was going to live in his house.

Just like I knew that dad was serious when he told me if I ever went to jail, he would not come get me, I knew he was serious about this as well.

Dad knew that the street had nothing to offer me. So I guess why pass-go, and just hit the street at 12 or 13, because that’s where I’m going to be any way with no high school diploma. Did my dad think that a diploma was some kind of Willy-Wonka magic ticket? No, but he did know that if I finished school, that success will set a new sort-of subconscious standard in me, keep me off the street (meaning out of crime, not necessarily homeless for my hood-impaired readers), and maybe even set me up for a “good-job” one day.

Well, to this day I love setting a particular goal and trying to meet what I set. I stayed away from the street (overall except for a couple of years at best and by God’s Grace, I survived) and I guess many would say I have a “good job”.

Dads are so unlike moms and that’s a great difference. There was no soft non-offensive answer, he didn’t care if I got mad and didn’t speak to him for a while, it was just time for me to decide if I wanted to make man-decisions while I was still a boy. He let me know that I better be ready to live with my choices.

That’s not being tough, that’s setting a standard and I think that no one sets the standards for the family as properly as, the father.