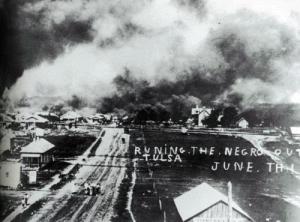 Today I’ve heard and read a few comments from people basically saying that the violence in Ferguson is representative of black people in general. That we all are violent, and therefore, it should be no surprise that police react to us in the way that they do. This is usually also delivered with a subtle cue that white people do not riot, and they certainly do not riot over racial issues.

Today we will debunk that lie. Rioting is no longer necessary by white society to exercise it’s social control and dominance. But historically, it has always been whites in this country that have rioted over racial issues, NOT black folks, when they felt justice was not served.

Don’t believe me? Ask your parents or grandparents! Ask what the reaction was in the neighborhood when black kids started coming to their schools and churches. I’d love to hear the responses below.

Those are just a few examples of rioting in this country, long before the ’60s race riots, Rodney King and now Ferguson. So if you hear someone yet again talking about “those people” in Ferguson, as if they are just a bunch of uncivilized savages, please share and ask, “So who do you think taught them to act in such a way?” or as my good friend would ask, “So what happened the day before?”

The answer is, the day before, parents, “good Christians”, college students, “hard-workers”, we out rioting, looting, killing, stealing and taking justice into their own hands when someone dared to move into their neighborhood, go to their schools, or break the Jim Crow color barrier.

However, one thing has remained the same, the dominant-society still escapes prosecution.

This only builds my faith in an eternal, all-knowing and all-seeing God that is also just.

For I the Lord love justice; I hate robbery and wrong; I will faithfully give them their recompense, and I will make an everlasting covenant with them.