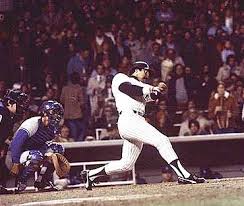 Today, Mr. October Reggie Jackson turned 65 years old. My dad recently turned nearly the same age at almost the same time. Reggie Jackson is a lover of muscle cars, my dad is as well. Reggie Jackson’s public persona seems extremely complex. Well, my dad’s public and private personas are complex as well. Reggie seemed to be one who did not believe in turning the other cheek. My dad’s advice to me was always throw the first punch because you don’t know if he’ll lay you out with his first blow. Reggie was born in Pennsylvania, my dad’s relatives are in Pennsylvania (okay, that one’s a stretch but I still counted it as a kid!).

But there is one glaring difference between the two men. Reggie made his fame and fortune from baseball and my dad hated sports. He made his fame at home and his fortune in the plant. Both men got dirty and worked with their hands, but in two very different ways.

Yet, had it not been for my father, I never would have looked up to “the straw that stirs the drink” (and Reggie did not mean that the way the reporter told it by the way).

Despite the fact that my dad never liked sports, he never discouraged my passion for baseball. As a matter of fact, two things he taught me early on that I’ve carried for over 30 years:

1.) Do not cheer for the home team, because they are losers.

2.) Look at Reggie, and how he handles himself, and that’s how you must handle yourself in this world.

Dad knew the impact the ‘hood could have had on me. While we weren’t exactly living in the projects, many of the problems of the projects existed, just in a cleaner neighborhood. Selling drugs, or what we called “rollin'”, was still the fastest way for a kid to make a lot of money and have a lot of girls fast. Shootings across the street from our house were common along with break-ins, car theft, and fighting. Thankfully, we also had many parents working solid middle-class jobs to always keep the neighborhood a float. Since they weren’t allowed to move into traditional white suburbs, they were forced to stay in their own community so in many ways, it benefited us all as a whole.

What we also had commercially, was a lack of black athletes on television when they were not on the field. But when dad saw how Reggie mastered the King’s English and commanded respect for his knowledge of the game and demeanor, he was wise to tell me to observe. Reggie often commentated for ABC in the ’70s and ’80s if the Yankees were out of the playoffs.

Little did I know at that time that one day I would have to at least know many of the rules of the King’s English as well when I grew up. I would also have to not be the “typical nigga or black guy” that many of my colleagues would expect me to be, just like Reggie. I would have to talk a certain way at job interviews, avoid being labeled and yet stand up for myself and prove that I deserved to be in that class or office and not because of Affirmative Action. At the same time, I would have to be just as complex, for people in America have a hard time understanding how you can be pro-black and yet marry someone of a different race. I’m sure Reggie ran into this as to some black folks, Reggie was a sell-out with his proper talking, candy bars, and white girls. But Reggie seemed to always make sure that he represented himself and the black community well. He spoke out about teams that did not have enough black players and even advised former teammate Willie Randolph not to take the Detroit Tiger job. They were the worst of the worst in Major League baseball. Reggie threw out the question the black community always asks, “Why do we only get the job/call/White House when things cannot get any worse? That’s just setting us up to fail!”

I can’t say I idolized Reggie. The man never put food on my table, but he did wave at me when I yelled his name at a California Angels game…he did…really! I’ve memorized many of his stats, read his autobiography, visited the Baseball Hall of Fame to have my picture taken with his bust, and even named one of my kids after him.

But my fascination with Mr. Jackson was never about him, but about what he represented. He was a man of class, determination, dependable, clutch-performer, and he danced to the beat of his own drum all the while paying homage to those like Robinson, Aaron, and Mays that bought the drum.